Around 2 a.m. EST on Dec. 30, famous cryptocurrency bitcoin reached an all-time high of $28,579.59, according to CoinDesk. It’s since pulled back a little, but is still up roughly 7% over the past 24 hours (remember, cryptocurrencies trade around the clock whereas stocks only trade when the market is open).

Fresh highs from bitcoin motivate traders to continue scooping up shares of bitcoin miner stocks like Bit Digital, Riot Blockchain, and Marathon Patent Group. As of noon EST, here’s where these stocks were:

These three stocks aren’t just big winners today, they’re also among the biggest winners in 2020. Not only is each one at least a 10-bagger and crushing the market, each is also drastically outpacing gains from bitcoin. And that could be a long-term problem for investors.

Up close to 300% in 2020, is bitcoin a bubble? To answer that, let’s consider how bitcoin works. And let’s also consider the time-tested economic principle of supply and demand.Â

Decentralized computers voluntarily choose to run the bitcoin blockchain network, and are compensated with bitcoin for their efforts. However, they’re paid with new bitcoin — each token has a unique digital signature. Because of how the bitcoin blockchain is set up, there can only ever be 21 million tokens in existence. But there’s already over 18 million in circulation. To keep the network from hitting its upper limit of 21 million anytime soon, new tokens are issued at a decreasing rate. 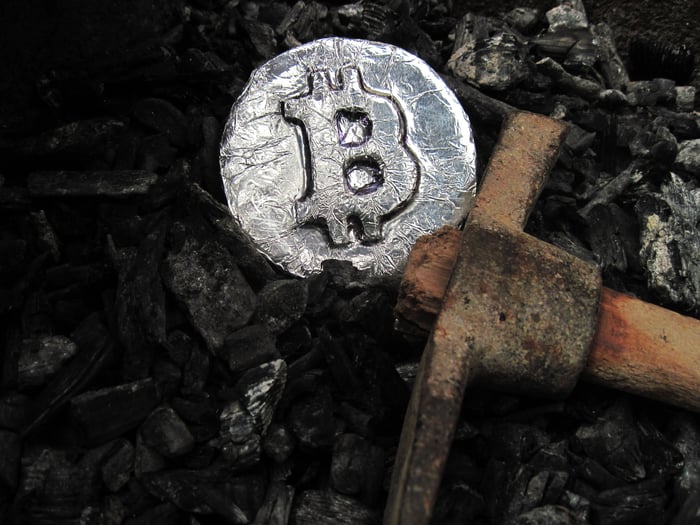 Now consider current demand for bitcoin. Technology company MicroStategy is one of many companies currently buying bitcoin. In MicroStrategy’s case, it’s opting to hold bitcoin on its balance sheet in lieu of cash. On Dec. 11, it even issued $650 million in convertible notes for the express purpose of buying more bitcoin.Â By Dec. 21, the company had already used the funds to purchase almost 30,000 bitcoin tokens to go along with the bitcoin it already had.

The demand for bitcoin from MicroStrategy alone was roughly 3,000 per day during that 10-day span — tripling new bitcoin supply. Furthermore, there’s plenty of additional ongoing demand from other institutions and retail investors alike.Â

When demand outpaces supply like this, prices generally go up. As long as this remains the case with bitcoin, I expect prices to keep rising and it’s why I own some. But is it a bubble? That depends on how long bitcoin will stay in demand, and that’s something impossible to predict. For that reason, I consider bitcoin a risky investment and recognize it’s not for everybody.Â

Here’s why all of this matters for shareholders of Bit Digital, Riot Blockchain, and Marathon. Each of these stocks has substantial valuation risk at the moment. Consider the current market capitalization of each stock compared to its trailing-12-month (TTM) revenue.

By comparison, Bit Digital is the biggest bargain of the bunch. But make no mistake, all three of these bitcoin-mining stocks trade at some of the most extreme valuations I’ve ever seen. These companies mine bitcoin, so as the price of bitcoin rises, so too should their revenue. But to ever hope to justify such a premium valuation, bitcoin would need to become a multi-bagger many times over from here.

For this reason, I believe the valuation risk for these bitcoin mining stocks is simply too extreme for investors. These are the true bitcoin bubbles that could pop at any moment. Therefore, I recommend investors stay away. By contrast, there appears to be true demand for bitcoin, which could earn it a small place in a diversified portfolio.